What are Sentiment Analysis and Unstructured Data?

These turbulent times make it challenging to manage a commercial loan portfolio while maintaining customer relationships. Staying connected with your customers' challenges and identifying early signs of defaults can help you manage risk across your portfolio more effectively.

In addition to a general discussion, we will be highlighting the use of unstructured data and sentiment analysis to benchmark risk in two real-world case studies:

Why Use Sentiment Analysis

As unstructured data volumes continue to grow, filtering through it all becomes more challenging. It can be complicated to extract and identify critical business information. Imagine sitting in front of an endless beach with billions of specks of sand, and small gemstones sprinkled just below the surface. Sifting through massive amounts of unstructured data for nuggets of value can feel as hopeless as trying to identify tiny gems on a large public beach. Sentiment analysis finds the jewels on the shore without having to sift through the entire beach by hand.

Unstructured data contains critical red flags and signals, however reading every available piece of information is not humanly possible. Sentiment analysis provides a measure of magnitude for red flags (or signals) and potential points of weakness in businesses.

The Basics of Sentimental Analysis

Sentiment analysis is an analytical tool for decision-making and is useful for many purposes, ranging from gauging political decisions to determining brand satisfaction. Two distinct variations of sentiment analysis exist:

Aspect-oriented analysis provides a reflection of attitudes or opinions about a specific subject or event. Instead of using a traditional binary "yes" or "no" approach, it provides additional context using multivariable analysis techniques. If an article contains numerous pieces of information, it can focus on a single variable, and the magnitude of one event can be measured using sentiment scoring metrics. Attributing sentiment scores to events can help determine if they are positive, negative, or neutral. Evaluating sentiment across all business-critical events allows you to assess overall company risk.

Performing sentiment analysis uses an analytical approach that involves understanding sentence and word structure. A sentiment analyzer will classify words as verbs, nouns, and modifiers and assign a polarity for
each, based on a lexicon of terms, similar to a dictionary but highly tuned to understand financial terminology.

The next step involves semantic orientation and linear sequencing. This method is critical to determine if a sentence is genuinely negative or positive. With semantic orientation, analyzers look at modifiers and terms together to infer context. For example, 'Despite the challenge' is a phrase that is positive in nature, though the individual words may be deemed negative. Linear sequencing looks at the order of a group of words to understand if a sentence is negative, neutral, or positive. For example, this sentence is full of negative phrases, but the sequencing of the phrases make the overall sentence positive: 'Everyone thought it was impossible, but Acme was able to overcome the challenges.'

The final step involves Deep Learning. Assigning a sentiment score to a sentence requires millions of data points to train sentiment models to understand the spectrum of sentiment. What is considered very negative vs. slightly negative or slightly positive vs. very positive, etc. Deep learning can help assess the relative magnitude of the data and determine whether the content is positive, negative, or neutral.

Deep learning is key to creating sentiment analysis and determining relative magnitude, first assessed at the sentence level before being evaluated at an article level. Final scores given to articles via sentiment analysis reveal whether the overall assessment is positive, neutral, or negative.

The sentiment spectrum provides overall scores ranging from -100 to 100 and reflects the negativity or positivity of an event.

Pier 1 Imports: Bankrupt Due to the Pandemic, But Had Instability Inklings Long Before 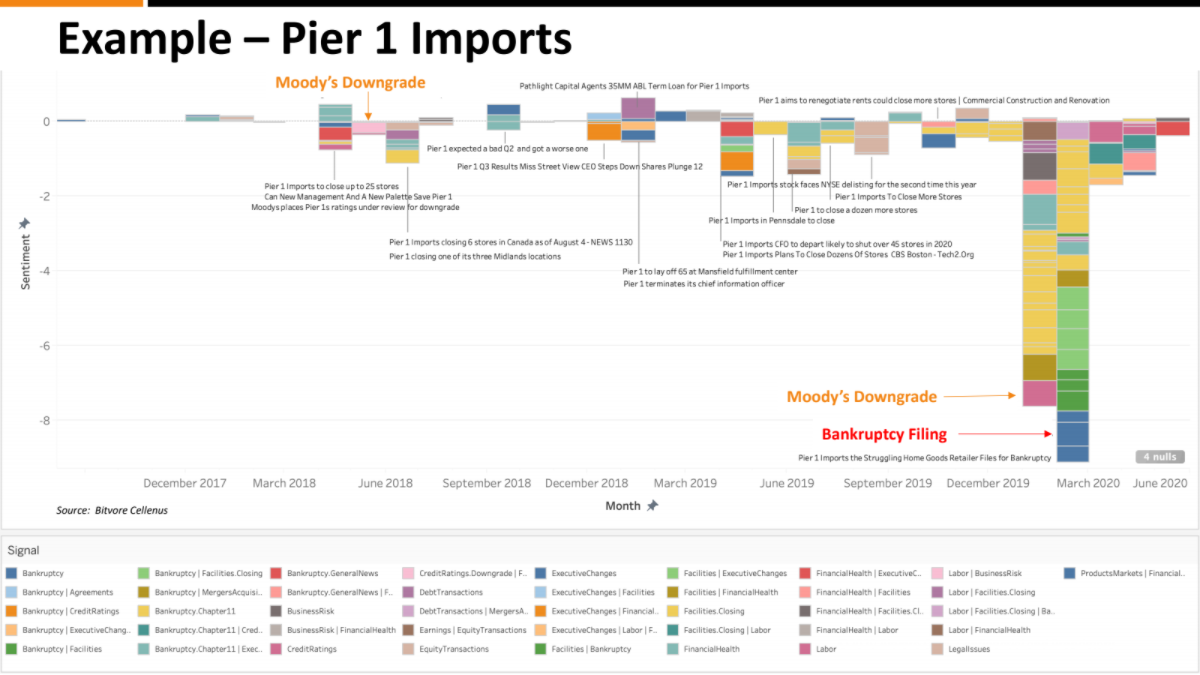 Bitvore Cellenus was used to analyze events over a specified timeline for Pier 1 Imports. A downgrade occurred in Q1 2020, but there was a telling set of events that led up to it. Competitive pressures forced the company to rethink strategies and adjust their current business models. Senior leadership changes took place along with store closures in early 2018. Various activities, influencing sentiment analysis scores, occurred between downgrades indicating other potential risk factors, such as additional store closures, delisting concerns, missed earnings, executive turnovers, and distressed debt commitments. Distressed debt is oftentimes correlated with subsequent bankruptcies as companies struggle with cash flows. News stories indicating potential bankruptcy emerged in April of 2019 with ultimate bankruptcy in 1Q2020, citing "the pandemic." Having data like this allows users to understand patterns of events that ultimately lead to default, downgrades and potentially bankruptcies. Sentiment and signal data can be fed into predictive tools to drive credit underwriting decisions. 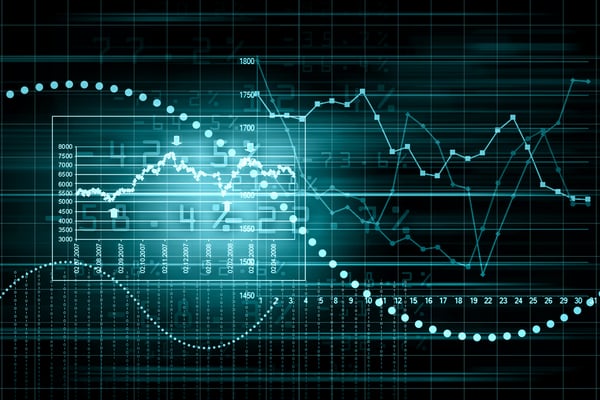 The power of unstructured data and AI helps companies comprehend the cumulative effects of multiple material events that will likely impact client investments or relationships. Piecing bits of information together over time will provide a more explicit representation of a company's long-term stability and growth. By tracking sentiment over time and focusing on those companies with red flags and potential risk factors, Bitvore customers can carefully analyze specific material business events causing negative sentiments to occur. Bitvore's sentiment scoring helps organizations identify when critical analysis is needed and allows customers to make informed business decisions by identifying potential risk factors. In the case of Pier 1 Imports, the sentiment and signals demonstrated typical patterns of an impending bankruptcy months before the event occurred. 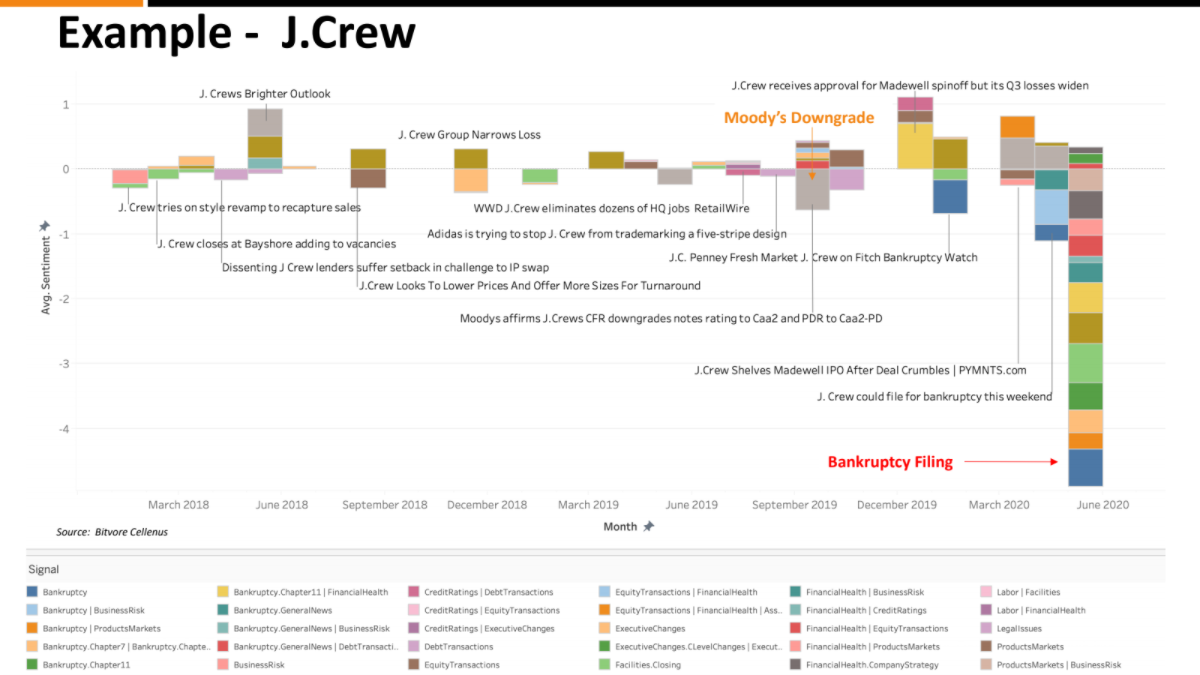 J. Crew had various significant red flags and compounding negative sentiment over the two years leading up to the actual pandemic. The pandemic simply pushed it over the edge, into bankruptcy. Two downgrades occurred in May 2019 and September 2019. Prior events also provided clear signs of corporate dysfunction and instability. For example, in November 2018, there was a mass exodus of staff and executive leadership changes. In January 2019, store closures occurred in four different regions. Although J. Crew eventually experienced temporary performance improvements, the financial difficulties soon became too much to bear.

Rumors of bankruptcy hit in April 2020 before it fully came to fruition in May 2020. Leveraging sentiment and signal data early on can help you maneuver and adjust your business strategy in advance of a downgrade decision or worst, a default or bankruptcy.

By tracking sentiment over time and focusing on companies with rapid decreases in sentiment, Bitvore's customers make informed financial decisions before their competitors, which is just the edge needed during these turbulent times.

How Bitvore is Using Sentiment Analysis to Improve Business

The amount of unstructured data available over the internet continues to expand at an ever-accelerating rate. Although having massive amounts of information at your disposal can be useful, attempting to sift through data to find relevant indicators of growth and risk can be challenging, time-consuming and honestly, just impossible without appropriate tools.

Developing useful analytical tools that apply sentiment analytics promptly can seem daunting to those unprepared. Data scientists often spend up to 60% to 80% of their resources integrating, normalizing, and cleansing unstructured data from multiple sources, severely impacting their ability to provide critical business insights.

Bitvore reduces painstaking manual tasks typically associated with unstructured data analysis using specialized AI-techniques and machine learning models that incorporate sentiment analysis. Decision-makers use our tools to augment their abilities, reduce costs and focus their time on revenue-yielding strategies. Most importantly, Bitvore allows decision-makers to "see around the corner" when sentiment scores are trending downward to action a decision that can save a company millions of dollars in loan defaults. The Bitvore Cellenus product line is improving business efficiency and augmenting human intelligence for fast and effective decision making. 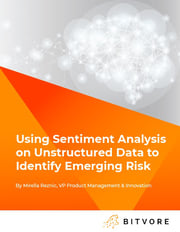 Learn more about how Bitvore’s technology can work for you.